If it’s autumn, the flower kigo (season word) must be chrysanthemum – also the symbol for the royal house of Japan which is known as the Chrysanthemum Throne. Chrysanthemum shows and festivals are held throughout Japan at around mid-autumn. 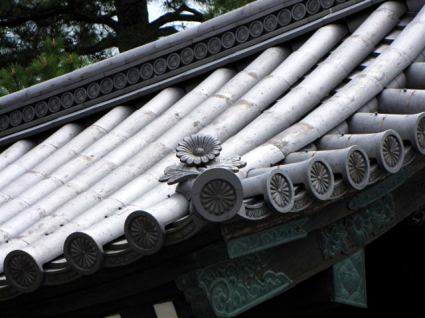 A chrysanthemum roof decoration at the Imperial Palace, Kyoto. The pattern at the ends of the tiles and along the roof ridge is also a chrysanthemum symbol. Photo: Sandra Simpson

lighting the lantern —
the yellow chrysanthemums
lose their colour

– Buson (from The Essential Haiku, translation by Robert Hass)

they spoke no words
the visitor, the host
and the white chrysanthemum 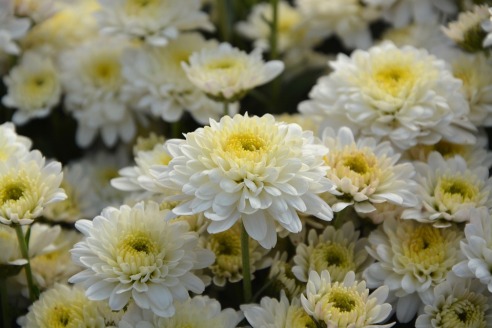 finding the moon
right in the middle
of the chrysanthemum

he leaves in an ambulance –
the chrysanthemum buds
closed tight

See photos of the many types of chrysanthemum flower on the Waikato Chrysanthemum Society Facebook page (don’t have to register to see it). I have had chrysanthemum tea in China and see that it’s available in New Zealand in various forms. I recall it as being quite pleasant, although it was many moons ago.

And not forgetting a plug for the Chrysanthemum haiku journal, published twice a year from Austria in English and German.

chrysanthemum garden
in this world too
bomb makers