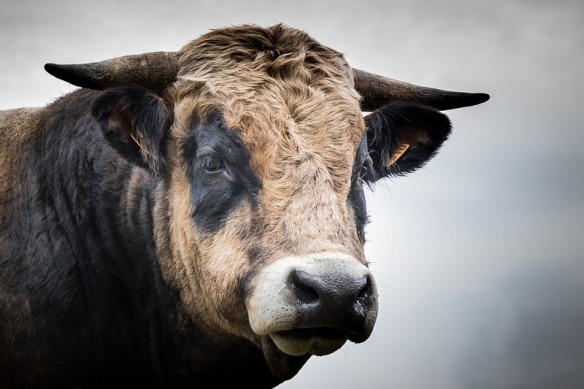 I’m reading Field Notes from the Edge: Journeys through Britain’s secret wilderness by Paul Evans (Rider Publishing, 2015) and was pleased to be safe in my bed when reading this description of a tense bucolic encounter after the author allowed his attention to wander.

He may not have been the biggest bull but he seemed massive to me. A head the size of a washing machine, huge neck and shoulders, long back, all deep russet red and rounded muscle – a brick shithouse of a beast. I looked into his eye.

This eye was unlike the oxeye daisy, which is really a pastoral joke in which the ox is prettified and conforms to a bovine ideal of cud-chewing reverie and disinterested stare. He was also not the snorting, charging, angry bull of cartoons. He was watching me closely with his robin redbreast-coloured eye, perhaps with a flash of gold in it. The eye lay at the forward edge of a body that could flatten a wall, not with a furious charge but with a mindful harnessing of colossal weight and strength of will. He was considering what to do. This bull was dangerous.

He began to eat, ripping up hanks of grass with his tongue whilst walking slowly but never diverting his eye from me. This grazing was subterfuge, getting me to think he was not charging while slyly gaining ground. I had heard of bulls working out how to kill someone and this felt premeditated. Perhaps it was payment for some mistreatment he had experienced; perhaps his hormones were pumped by the cows and his blood was up; perhaps something had woken inside that boulder of a skull, some wild bullness was taking over from thousands of years of domestication. It was going to be existential for both of us.

The stand-off fortunately ends peacefully. The author, heart pounding, manages to assert the farmer’s ‘ancient claim’ to authority and sends the bull on his way.

spring fever
the farm gate swung wide
for the bull

This in-your-face haiku was written by Issa in 1812:

dangling
in the yellow roses
the bull’s balls

Translator David Lanoue says: “Here, as often in Issa, we find a startling juxtaposition. Fearlessly and without self-censorship, he presents what he sees. And also, as often is the case, after the initial shock of the image wears off, we find deeper connections to ponder. The bull’s testicles and the roses, after all, are sex organs.”

While researching for a forthcoming post, I discovered that in Japanese literature ‘yellow roses’ are understood to be yamabuki flowers (Kerria japonica), not a rose at all and without any thorns! (Which was worrying me a bit about the image above …) 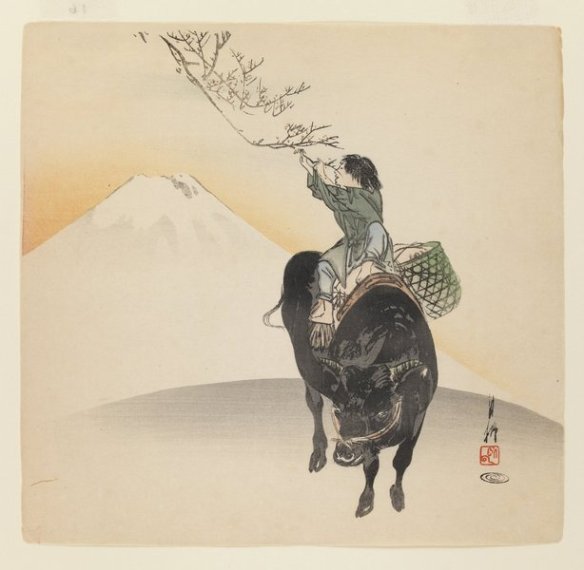 ‘Boy on Ox’ is a woodblock print by Ogata Gekko, made in about 1890-1910. Image: Brooklyn Museum, Gift of the Estate of Dr Eleanor Z. Wallace

Like Paul Chambers’ haiku that opens this posting, American poet Richard Wright subverts the typical view of a bull as one of uber-masculinity.

Coming from the woods,
a bull has a lilac sprig
dangling from a horn

Japan holds regular bullfights (togyu), held in front of paying crowds, which are a recognised folk custom. Unlike Spain however, there are no matadors and picadors; the bulls simply lock horns with one another and push. The bouts are run along the lines of sumo wrestling matches and no animals are put to death as part of the spectacle. Indeed, it seems the bulls are fed well and treated better. Read more here. The Choju-giga scrolls, painted from the mid-12th century to the end of the 13th century, are the earliest record of bullfighting in Japan.

Pamela Brown
from another country: haiku poetry from Wales (Gomer, 2011)

noon sun
the bull
in a knife’s reflection

Changeable spring weather has been to the fore this year – just today I have personally experienced bright sunshine, strong winds, lashing rain, hail, heat and cold. Ah, we think, as the sun breaks through, that’s the rain gone then …

I was standing outside a garden centre café, fortunately under a verandah roof, chatting to a friend I’d bumped into at lunchtime when it started to hail! To the end of August we’d already had more rain than the yearly average (1344mm) so it’s on track to be one of the wettest years since records began in 1898.

Instead of moaning, thought I’d seek out and share some themed haiku from my bookshelf. 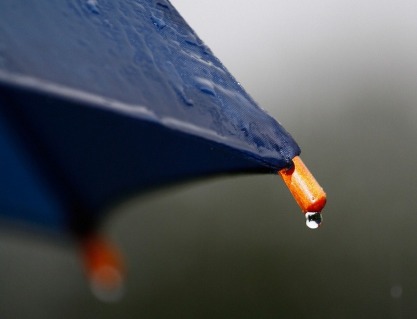 holding a knife
I feast my eyes
on a rain shower

left out
in the hailstorm
a pogo stick 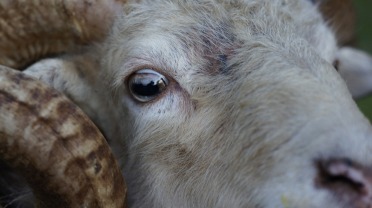 uncertain sky
the dark centre
of the ram’s eye

cold blue sky
coughing up
a couple of clouds 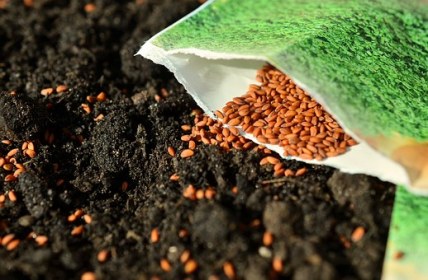 shaking
the packet of seeds
asking, are you still alive?

spring rain –
speaking of the dead
in a softer voice

A friend said the other day that she had enjoyed reading my successes on this blog, but I wondered if there was a hidden message there, like stop skiting! (It does no good to worry away at words in email, they actually tell you very little.) It may be tedious for you to read only my good news, but it’s hardly thrilling for me to post about my failures …

So here’s a little bit of both.

I have submitted this haiku to a couple of my favourite journals and it was turned down each time. However, I believed in it and knew it would be loved one day. That day has arrived, dear readers.

the moon’s apostrophe –
everything I know
learned from books

has been placed Second in the Haiku Presence Award (UK) and co-judge Matthew Paul has written a thoughtful and detailed commentary for it. I am using my winnings – 25 squid – to renew my subscription to Presence, which is itself a thoughtful journal. I also received a Commended.

Pamela Brown’s winning haiku is a beauty (and one I won’t reveal here as the winning poems will be published shortly in Presence #49). One of the joys of Presence is reading Pamela’s work, which is always rewarding – closely observed and genuine.

– Pamela Brown, Presence #47, chosen as one of the best three haiku in that edition by popular vote.

Born in England, she moved to Wales in 1980 to work as a shepherd, ending up with her own breeding flock. Pamela is retired now and doesn’t have email! (Some of this detail is from the bio notes in Another Country, haiku poetry from Wales, published by Gomer Press in 2011.)

at the tip
of the slateworker’s chisel
an equal world

crescent moon:
the clink of the bull’s ring
along the gate

– Pamela Brown, from Another Country