The importance of rice to the culture of Japan would probably take a lifetime to research – and then some! This ancient grain is part of art, mythology and religious belief, as well as an everyday staple of life. Here’s a peek at just one of the many traditions … 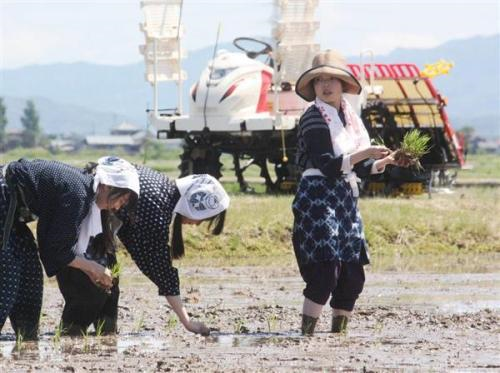 girls planting paddy:
only their song
free of mud

The same day Emperor Akihito and Empress Michiko sowed dry-land rice and millet at the Imperial Palace. Both the couple’s sons and their families also participated in what is a long-standing tradition.

The Emperor followed this up on May 25 by planting more rice at the palace – the last time he will carry out this duty as Emperor. Akihito abdicates on April 30 next year, after 30 years on the throne, in favour of his older son Crown Prince Naruhito. 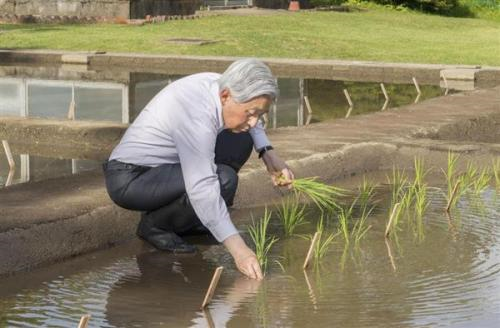 Emperor Akihito plants rice at the Imperial Palace in 2018.

The sajiki (dictionary of season words) at Gabi Greve’s World Kigo Database says: The Emperor, embodying the god of the ripened rice plant, plants the first rice of the spring and harvests rice from the plants of the autumn. In one of the most solemn Shinto ceremonies of the year the Emperor, acting as the country’s chief Shinto priest, ritually sows rice in the royal paddy on the grounds of the Imperial Palace. 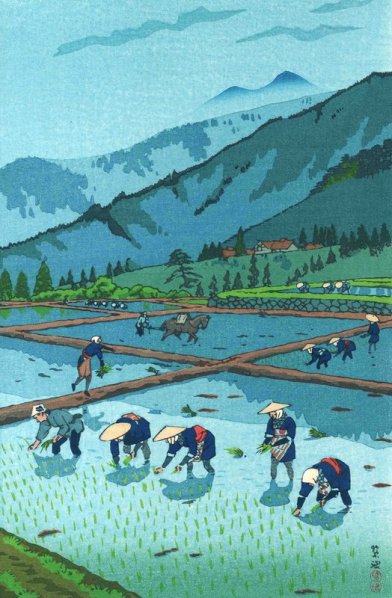 The above poem is another from Basho’s travelogue, Narrow Road to the Deep North. Here is the passage, and an alternative version of the poem, as translated by Nobuyuki Yuasa:

I went to see the willow tree which Saigyo celebrated in his poem when he wrote, ‘Spreading its shade over a crystal stream’. I found it near the village of Ashino on the bank of a rice-field. I had been wondering in my mind where this tree was situated, for the ruler of this province had repeatedly talked to me about it, but this day, for the first time in my life, I had an opportunity to rest my worn-out legs under its shade.

When the girls had planted
A square of paddy-field,
I stepped out of
The shade of a willow tree.

June 15: Just found the following while searching for something else and thought it was a natural fit for this post.

Looking at Mount Fuji,
The rice-planting girl
Adjusts her hair.

Anon., from Japanese Life and Character in Senryu by RH Blyth (1960)