New editions of Kokako (26) and NOON: journal of the short poem (13) landed this week, plus I spied a hard copy of Frogpond 39.3 on someone’s coffee table the other night so quickly flicked through (a sampler of haiku from each edition appears on the website but, alas, mine weren’t among them).

Reproducing this haiku – on the second day the remnants of Tropical Cyclone Debbie have been pouring down on us – seems appropriate. (Thoughts are with those affected by landslips and flooding in the North Island and the full force of Debbie in Queensland, Australia.) 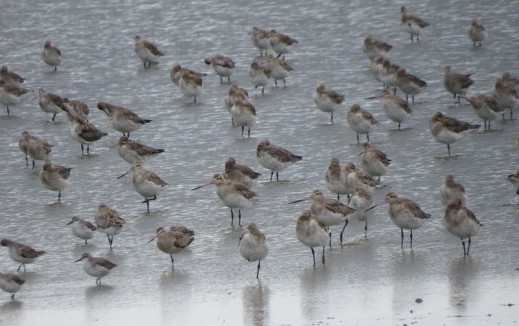 We toddled off for a couple of nights in Miranda just after New Year as I particularly wanted to see the bar-tailed godwits that come for the summer from Siberia and Alaska, and that part of the coast along the Firth of Thames is one of their preferred migration spots. The Miranda Shorebird Centre has a hide and over the summer had a couple of volunteer guides there daily to chat and inform, plus share a high-powered telescope with visitors. One thing I learned is that as the males come into their breeding plumage, their bills also change colour, turning from mostly pink to mostly black with the change starting at the tip (they breed only in the Arctic).

I’m always slightly astounded that my work appears in NOON: journal of the short poem, it being a publication that favours the cutting edge and me not seeing my work as even a little bit ‘out there’. However, editor Philip Rowland often selects my haiku and two are in the latest edition.

wisteria in full bloom the rest escapes me

And, finally, a Senryu appears in the online anthology of this year’s Sharpening the Green Pencil Contest, organised in Romania. The poem tells it like it was.