I’ve been wondering what to post in these strange days of lockdown, social distancing, self-isolation and quarantine. Plenty of people are hitting cyberspace with ‘haiku’ they’re writing to stave off boredom/amuse themselves and yet still want to inflict upon others.

So I thought I might try and find some decent poems that are tangentially about the situation many of us find ourselves in. One thing that occurred to me too late was that even if New Zealand’s lockdown lasts only 4 weeks, I’m going to need a haircut in that time – if lockdown lasts 8 weeks or even 12 I’ll be turning into a cavewoman! Haiku Husband has already said he won’t do it, which seems a bit unfair as I’ll be trimming his beard, as I’ve done for almost 40 years!

Still, I have given myself a haircut once before – using nail scissors and the wing mirror of a VW Kombi van parked in a campground in Salamanca, Spain! Needless to say, the next professional I saw said: “Who gave you your last cut?”. The insouciance of youth … and now age!

my child with a cold –
her forelocks almost
her eyebrows

What’s the difference between a bad haircut and a good haircut? About 2 weeks!

last week’s haircut
my DNA
in the phoebe’s nest

Native to North and South America, phoebes (Sayornis) are part of the flycatcher family of birds.

Nicholas Virgilio
from The Haiku Anthology (1999)

evening rain—
I braid my hair
into the dark

Not having access to hair dye has apparently been a big lockdown issue for some (if you can believe the ‘popular’ press). Fortunately, not a problem for me as I’ve been naturally grey for years!

too young
to look so old —
grey temples

Travelling around the old goldfields in Victoria, Australia last week and the name on a 19th century building caught my eye – Mechanics’ Institute. From the depths of memory I was able to dredge up that the first library in Tauranga was in the Mechanics’ Institute, but what, I wondered, did mechanics have to do with anything?

A few seconds later Haiku Son had the answer from Google. The first Mechanics’ Institute opened in Edinburgh, Scotland in 1821 to provide working class men, not just mechanics, with technical education, revolutionising access to education in science and technology for ‘ordinary men’ – and breaking down the guild system of specialised learning being protected.

In Australia, the first Mechanics’ Institute was in Hobart, Tasmania, opening in 1827, while Melbourne got one in 1839. From the 1850s (and coinciding with the gold rushes), Mechanics’ Institutes spread throughout Victoria wherever a hall, library or school was needed. Over 1200 were built in Victoria but just over 500 remain today, and only six still operate a lending library service. Read more in the Wikipedia entry. 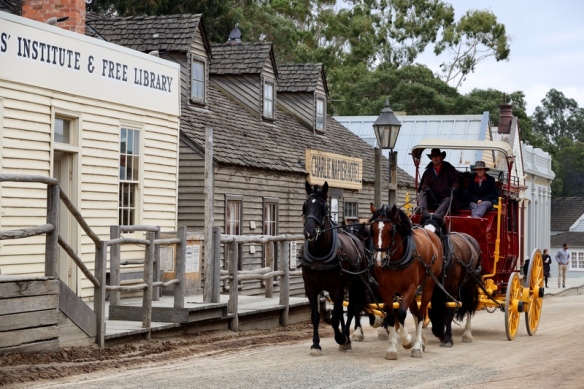 The Tauranga Mechanics’ Institute was founded in 1871, with library membership on an annual subscription basis (the library opened in someone’s home before there was a building) – membership jumped from 20 annual members in 1871 to 106 the next year! The authors of Tauranga 1882-1982 fudge the question of when a stand-alone building was erected, perhaps in 1873, but in the early hours of May 31, 1881 the building was razed by fire in one of the city’s most disastrous events. Onlookers, however, managed to save most of the books.

An architect designed a new building free of charge and this was opened in November 1881. This building also became Tauranga’s first museum when items were donated in 1881 for that purpose. Dear readers please note that in 2020 Tauranga does not have a museum! It has a ‘heritage collection’ which sits in storage and so is not available to the public, but since the City Fathers saw fit to close the displays at the Historic Village in  1998 the city has continually stuttered over the issue of a purpose-built museum.

By 1906 the Mechanics’ Institute library had become the Tauranga Public Library. The 1930 art deco library (and town hall) building, which apparently included some striking stained glass, was demolished in 1987 much to the fury of Ngai Tamarawaho who initiated a land ownership claim and occupied the building.

A new library opened in 1989 but the story doesn’t finish there as the architect-designed building leaked badly during rain (and it can pour down here) so that problem remained the same as in the 1930 building. In 2007 the library was refurbished and a new storey added on top (which solved the leaks) but at the end of 2014 part of the library had to be shut when toxic black mould was found (after staff complaints of illness) in the adjoining Tauranga City Council premises. The affected areas re-opened in early 2015. The main part of the council building was demolished and has yet to be replaced. Nup, nothing happens fast round here.

summer breeze
setting aside the book
to smell her hair

cold chrysanthemums
too late to return
the borrowed book

bird by bird
the toddler kisses
her story book