The latest edition of The Heron’s Nest has been published and includes this haiku of mine:

This was a real scene that I laboured to get right, partly in acknowledgement of all the great goose haiku that have gone before. Here is just a small sampling of the many that I like (by the way, New Zealand doesn’t have migratory geese which rather puts us behind in haiku terms). I’ve posted the first two before, back in 2014, but still love them.

Alan Summers has pointed out (see Comments) that my original posting using ‘stopped’ in Jan’s haiku was incorrect. In White Heron, her 2011 biography by Sharon Dean, Jan says:

“Everyone tries to correct me … I actually used the old-fashioned past participle stopt instead of stopped because to me it sounds more sudden, and I didn’t want to break the flow of the haiku for too long with an exclamation mark. Somehow that stopt allows the haiku to read shorter and quicker… In using stopt I wanted to convey to the reader that I was very definitely stopped – firmly stopped. I even had the car engine turned off.”

the sound of geese through the crosshairs

river fog …
the sound of geese
coming in from the sea

the first flakes of snow
drifting down the wetlands
Canada geese 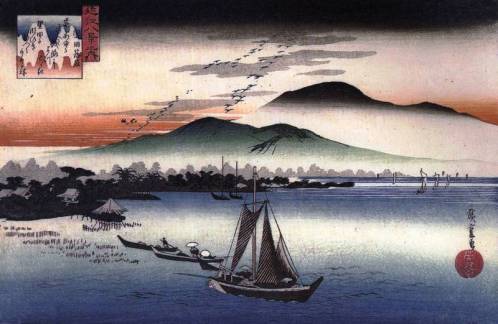 the travelling geese
check it out thoroughly…
sooty mat

– Issa, written in 1807
from The Haiku of Kobayashi Issa

Translator David Lanoue offers this comment: The mat is a tatami mat made of woven straw. The fact that it is sooty implies that it belongs to “beggar” Issa.

A new, slim volume of work from Owen Bullock who is rapidly becoming a citizen of the world – born and raised in Cornwall (UK), has lived for decades in the upper North Island of New Zealand and is currently a PhD candidate in Canberra (Australia). 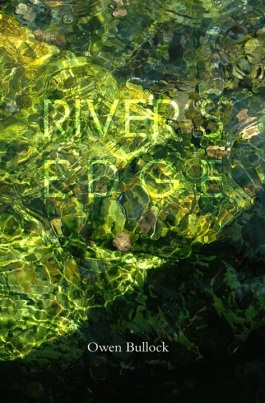 Many of the poems in the book, which follows his 2015 collection Urban Haiku (Recent Work Press, read a review here), stem from his work in New Zealand as a home caregiver and are more properly senryu, although the author terms the collection ‘haiku’ in his brief introduction. (See Owen’s footnote 1 at the end of this review.)

“I was visiting elderly people in their own homes, which was far more meaningful. They told stories in which their wisdom shone through.”

Bullock is finely tuned to the daily struggles, humilities and joys of the end stage of life and these senryu are touching, without being in the least sentimental or demeaning to either party, and I heartily recommend the book on the strength of these poems alone.

on the piano
photos of the ones
who don’t visit

not good news …
he puts the lid back
on the jam

Caregiving must throw up many moments where both the giver and receiver need to grin and bear it (or bare it) and Bullock’s sense of humour doesn’t fail him.

massaging
my male client’s back
in a bloke-ish way

As it is, River’s Edge intersperses caregiving senryu with senryu on other topics and even some ‘maybe’ haiku – poems that have a nature focus, although often without a season word – leading to a somewhat jarring progression. (See Owen’s footnote 2 at the end of this review.)

However, knowing Bullock, I expect this ‘leave and return’ is an intended subtlety, a reflection of the messiness of life where our interests – and the calls on our time – are many and varied. This happens, then that and now we go back to this. After a week of caregiving he has mental space to observe nature, carry out a few chores, then it’s back to work.

shopping for clothes
wanting to buy
what I’m wearing

Seen as a journal of a period from Bullock’s life River’s Edge becomes a more cohesive whole and, to my mind, a more satisfying read. The author however, offers no nudges in this direction in his introduction (so I may be quite wrong).

The book, which uses good-quality paper, features one poem per page, giving the words of each poem plenty of space to interact, both with each other and within the reader’s mind.

somewhere
in that mass of cloud
a few of your cells

And for the one or two poems I found myself unable to mine below the surface image:

there was one like this on the next page:

ahead the pouring light

I hope Bullock will delve further into his caregiving work and consider a complete themed collection on the subject, perhaps including haibun, another form for which he’s known.

It would be an unusual – and I suspect valuable – collection, especially given Bullock’s eye for detail, his calm observation and clear humanity towards the people for whom he was caring.

dusting
her little vases
this is my devotion

Through his words they have been given a voice and it’s one I suspect they’d rather like.

Footnote 1: I can’t be bothered distinguishing too much between senryu and haiku, but when I do try I realise that my definition of haiku is broad and takes in many pieces that others label senryu. To me, the fact that a piece is about a human being doesn’t make it a senryu, because we are also nature. It’s only a senryu when the poem gets into the mind of an individual and directly reflects human perception.

Footnote 2: I’m afraid I don’t and haven’t for a long time seen seasonality as essential to haiku. Partly this was because of my being from Cornwall and then moving to New Zealand, where I began writing haiku. Living in New Zealand, it took me many years to be able to consciously distinguish between seasons enough for that to be reflected in my writing – there simply weren’t seasons in New Zealand, it was basically mostly summer, and I still don’t countenance the idea of winter there (only when I lived in Southland and the pipes froze every day could I perceive winter).