The paulownia trees are flowering just now – they always catch my eye because the purple flowers seem such a long way up. We used to have one on a boundary with a neighbour but it’s not so much the flowers I remember from that tree but the sound of sparrows rattling the seed pods.

Paulownia (empress tree, foxglove tree) is named for Anna (1795-1865), the daughter of Tsar Paul 1 of Russia (1754-1801). Courted by many, including it’s said Napoleon Bonaparte, she married the future King William II of The Netherlands, who stayed with the Russian royal family for the best part of a year before she agreed to the match. In The Netherlands, she was known as Anna Paulowna, which gives us the tree’s botanical name. Read more of this story here, as well as some botanical background.

Just about past, the blossoms of a paulownia tree. Photo: Sandra Simpson

The faintly perfumed wood is traditionally used in Japan for clothes chests, particularly kimono, as it contains a natural insect and mould repellent, and is slow to burn (a big consideration when everyone lives in wood and paper houses). Read more about Japanese traditions associated with the paulownia here, including the planting of a paulownia when a daughter is born.

Underlining its treasure box status is the fact that in The British Museum is a set of four calligraphy albums featuring haiku by Basho – one album for each season and each album stored in a paulownia box.

I wasn’t able to find any haiku about paulownia blossoms – only the tree’s leaf fall in autumn which has significant, and ancient, connotations for Japanese and Chinese poets.

The notes with the haiku say this (in part):

The term ‘one leaf’ in a Japanese haiku is code for paulownia (kiri in Japanese).The fast-growing tree’s leaves drop throughout the year and symbolise loneliness and connote the past. The large, purple flowers are deeply associated with haiku because they hold 3 prongs of 5-7-5 buds, respectively. The blooms and their bracket of leaves form the crest of the Empress of Japan. Totsu is an exclamation uttered by a student of Zen Buddhism when enlightenment is achieved – it is also said to be the sound a paulownia leaf makes as it hits the ground upon falling.

with a singing cicada
softly…
one leaf falls

David Lanoue’s notes say: The phrase, “one leaf” (hito ha), specifically denotes a paulownia leaf in the shorthand of haiku. Shinji Ogawa notes that naku semi mo tsurete means “together with the singing cicada”. The falling leaf has a passenger!

The footnote to another poem amplifies the power of ‘one leaf’: Shinji Ogawa comments: “In a Chinese book, Enanji (in Japanese pronunciation) published in the early third century, it is written that when a paulownia leaf falls, the world’s autumn is known. The ‘world’s autumn’ implies the changing of the dynasty. Since paulownia leaves are the crest of the Tyotomi family that ruled Japan in the sixteenth century and was ruined by the Tokugawa, the word hito ha (“one paulownia leaf”) implies a sort of sadness.” 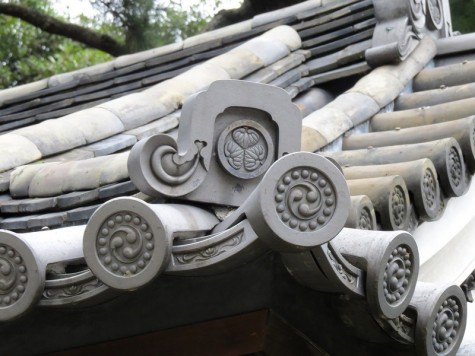 The symbol of the Japanese empress – three paulownia leaves – is seen on a roof tile in the Imperial Palace, Kyoto. (The tadpole-type symbols on the other tiles are apparently water drops that act as a ‘charm’ against fire.) Photo: Sandra Simpson

making sure we know
that autumn is here, a leaf
from the empress tree