Merry Christmas – or happy holidays – to my readers near and far. I hope you find some happiness in this season of goodwill and festive cheer. A stranger gave me a ‘Merry Christmas’ this morning as we passed one another crossing the road. Easy to do but worth a lot.

We attended a family funeral this week and arrived early enough that we had to wait at for a group of children to finish practising their Christmas songs ready for a performance. It was an odd juxtaposition.

Sonia’s loss is felt keenly by all her extended family, she was a very warm and loving person, but in reality we had started grieving her some time ago as continuing strokes steadily eroded her physical capabilities until she was unable to speak, write or move.

terminally ill –
and her nails beautiful
by the wooden heater

When I was cleaning out a room at my mother’s I found a dance card from a debutant’s ball of about 1955. My father, who was Sonia’s cousin, had accompanied her and his best friend was there too with his name also on the card. I brought it back and gave it to Sonia who was thrilled to see it after all this time. (My mother was apparently a natural archivist as she’d stored away all sorts of interesting bits of paper.)

There are about 35 species of glossy Christmas beetles (Anoplognathus genus) in Australia, so named because the adults emerge close to Christmas period. They are attracted to bright lights. Read more here.

Christmas week weather has been hot, hot, hot with Victoria’s heatwave blowing over to New Zealand, although that is starting to ease back a little. No rain in sight though and with the strong winds that have come with the heat the ground is drying out fast.

December already –
the clock
has scissors for hands

This time last year I spent an early morning at A&E (hospital emergency department) in great pain wondering what on earth was wrong with me. My GP had been unable, at that stage, to pinpoint what was causing the repeated stomach pain I’d been having since about August … turned out to be a kidney stone … and my early morning dash to the hospital was when I passed it. Still had to have a couple more tests to rule out things as we had no proof it was a kidney stone. But all has been quiet on the western front since.

Enjoy your season of giving, stay safe and see you back here next year!

mid-spring under my boot matisse’s snail 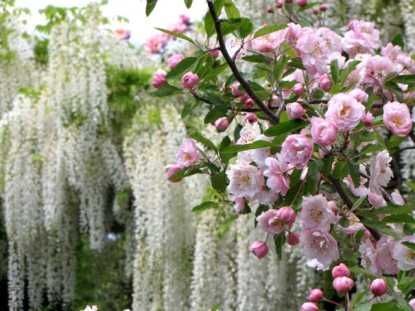 And a nice surprise recently – a haiku selected for inclusion in the 2014 Capoliveri Haiku Contest anthology (Italy), which has been made available this month. Nice to see the poem translated into Italian too (I rather like that ‘a flock’ of swallows is ‘uno stormo’). The contest is for 5-7-5 haiku.

Last night I attended a local do at Books A Plenty to announce the longlist for the brand-new Acorn Foundation Book of the Year Award – Fiction.

Why was it being held in Tauranga? Because the Acorn Foundation is a local initiative that is having a big impact. The organisation, which has charitable status, receives legacies and donations which are then put to work for the community. During her speech, Acorn general manager Nicky Wilkins revealed that Acorn now holds $14 million (!) and from that has distributed about $550,000 in 12 months.

The money for the new literary award has come from an anonymous donor who was prompted to act, Nicky said, after wondering why someone at a cricket match could win $1 million for catching a ball one-handed while the country’s premier book awards were about to collapse because sponsor NZ Post had withdrawn.

Not only did this donor offer to help continue one of the awards but upped the fiction prize from $10,000 to $50,000 to encourage and support New Zealand authors. Nicky said that this is now one of the biggest awards for fiction in the world! And it’s a donation in perpetuity!!

The shortlist will be announced in March and the winners of all the NZ Book Awards on May 10 at the Auckland Writers Festival with the authors then appearing over the weekend at the festival.

Besides the Acorn fiction prize, other categories in the Ockham Book Awards are non-fiction (split into two awards) and poetry. Four ‘best first book’ awards will also be presented, one from each category.

Harriet said that 25% of book sales in New Zealand are fiction – but only 3% of that is New Zealand fiction, and described the new prize as a ‘gold-plated acorn’ for Kiwi writers.

In previous years, Nicola told me later, the prizes were judged by a panel of five who did all the categories (amid numerous complaints, apparently, from the poets!). This year each category has its own set of three judges. The Acorn prize is being judged by award-winning author Owen Marshall CNZM; Wellington bookseller and reviewer Tilly Lloyd, and former director of the Auckland Writers Festival and former Creative New Zealand senior literature adviser Jill Rawnsley.

Books A-Plenty co-owner Chris Baskett gave a useful run-down on each book (she’s read almost all of them and is in the process of completing the set) and offered the occasional opinion on her preferences. Many books were sold.

Worth mentioning is that The Chimes was long-listed for this year’s Mann Booker Prize and that Stephen Daisley, while born in New Zealand, lives in Perth in Australia and won the 2011 (Australian) Prime Minister’s Literary Award for Fiction for his first novel Traitor.

Read the other long lists and judging panels here.

I’m not much of a drinker so when the list came round on a dinner boat on Tokyo Harbour I opted for umeshu, a plum liqueur, with soda, which turned out to be delightful and not to contain much alcohol (read how to make it here). Haiku Husband however, said ‘yes, please’ to warm saké and thereafter ordered it whenever he could.

We arrived back to our hotel in Tokyo after dark and after a long train journey from Hiroshima to find a saké-tasting market set up in a plaza area. So after getting settled in we went back and HH tried a few of the wares on offer. We also got to say hello to Miss Saké who looked gorgeous and happily posed for photos for us.

Santoka (1882-1940) was, among other things, a Zen monk and a haiku poet who seems to have spent his life either drunk, figuring out how to get drunk or drying out! Needless to say his attempts earlier in life to help his father run a saké brewery ended in disaster. However, according to information on the World Kigo Database the rights to the business were purchased by another family and the brewery continues, including making a brand called Santoka. It is in Hofu, in Yamaguchi Prefecture (Santoka’s home town). Read more about his life, and many of his haiku, here.

People view all things, all events in terms of what they value in life, with that as their standard. I look at everything through the eyes of saké. Gazing far off at a mountain, I think how I’d like a little drink; I see some nice vegetables and think how well they’d go with the saké. If I had such-and-such sum, I could polish off a flask; if I had this much, I could buy a bottle.

You may laugh, but that’s just the way I am – nothing I can do about it.

Read more of his diary and more of Santoka’s haiku here.

it is cold, but
we have saké
and the hot spring

Shiki is seen as the fourth of the Great Pillars of haiku in Japan (after Basho, Buson and Issa). Read more about his life here.

In his Haiku NewZ selection of Favourite Haiku, Richard von Sturmer included this haiku and comment:

we drink from tiny cups
as we wander
through the chrysanthemums

Japanese cups, in particular saké cups, are tiny. Issa and his friends wander among the large flowers, taking small sips. Life passes, all is unknown, and yet we have haiku, this small verse form, to help us appreciate the mystery and the beauty of this fleeting world.

Not drinking from tiny cups, but pouring her saké into water glasses for the tourists from New Zealand is the proprietor of an okonomiyaki (savoury pancake) joint in Hiroshima. She said she was 87 – looked about 65 – and the secret was plenty of sleep and 2 glasses of saké at bedtime! Photo: Sandra Simpson

There is a great deal of information about the history of saké (from time immemorial) on the World Kigo Database site. And this Japan Times article on the history of saké reveals that it was originally fermented rice that was eaten – the addition of pure water came later. 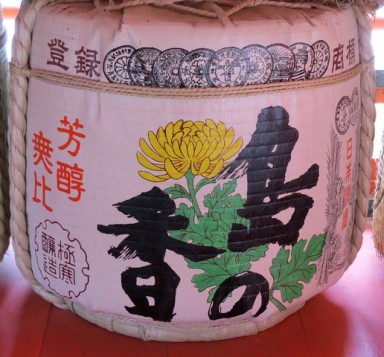 A wall of saké drums was neatly stacked in the Itsukushima Shrine on Miyajima Island, just off the coast off Hiroshima. Apparently the brewers were saying ‘thanks’. Photo: Sandra Simpson

leaning this way
and that –
saké drums

The traditional symbol of a saké brewery – sugidama, a ball of cedar needles. It’s said that when the green needles turn brown the saké is aged enough for drinking. Photo: Sandra Simpson

passing the jug
the warmth
of many hands