It was a hot day in Kanazawa on Japan’s west coast on November 11 – the coloured leaves were telling us that it was autumn, but …

Following a tour guide around the famous Kenrokuen (literally: Combining (ken) six (roku) garden (en) – it combines the six main themes in a Chinese-style stroll garden), rated as one of Japan’s best three gardens, Haiku Husband noticed a ‘Basho Memorial’ on the map. Fujio-san was more than willing to lead us there. And here’s what we found. 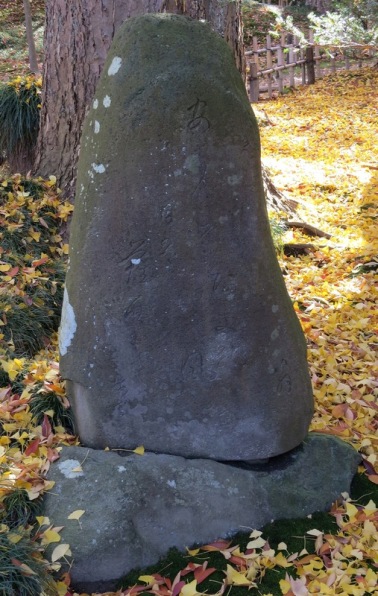 A rock inscribed with a Basho poem in the Kenrokuen. Photo: Sandra Simpson 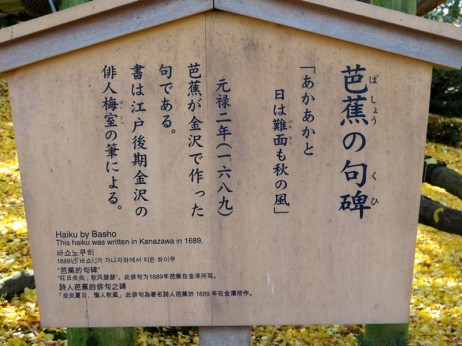 The neighbouring signboard reveals the haiku was written by Basho in Kanazawa in 1689 but doesn’t include an English translation. Photo: Sandra Simpson

Fujio-san came to the rescue with a translation, shortly afterwards offering the RH Blyth version:

The following is translated by Donald Keene from The Narrow Road to Oku (Kodansha, 1996, with illustrations by Miyata Masayuki):

After crossing Verbena Mountain and the Valley of Kurikara, we reached Kanazawa on the fifteenth of the seventh month [old calendar]. We shared lodgings with a merchant named Kasho from Ozaka …

redly, redly
the sun shines heartlessly, but
the wind is autumnal

Nobuyuki Yuasa provides the following version. His entire translation of Narrow Road to the Deep North may be read at the Terebess Asia Online website.

Red, red is the sun,
Heartlessly indifferent to time,
The wind knows, however,
The promise of early chill.

I found the following uncredited translation on a website that sells Japanese calligraphy and rather like its more spare, modern feel:

bright red,
the sun shining without mercy –
wind of the autumn

although would make this edit to the last line: wind of autumn

Another uncredited translation from Haiku of the Forest website:

And, finally, a translation by Dorothy Britton from A Haiku Journey (Kodansha, 1980), her version of Oku no hosomichi:

How hot the sun glows
Pretending not to notice
An autumn wind blows!

Her translations of haiku, by the way, always rhyme. In her Introduction she writes: “Rhyme is a device unsuited to the Japanese language, but in English it helps to suggest the formal elegance achieved in the original by those elements impossible to translate, which the poet James Kirkup so aptly calls ‘the subtle play of sound and meaning’.”

As a side note, Dorothy Britton (Lady Bouchier) died in February of this year, aged 93. Her life story is fascinating. She was born in Yokohama to an English father and American mother and from the age of 13 was educated in the US and Britain, returning to Japan after the American occupation began and meeting her English husband, Sir ‘Boy’ Bouchier. Her memoir – Rhythms, Rites and Rituals: my life in Japan in two-step and waltz time – was launched in London just a few days after her death (she had been planning to attend).

“She led a life of extraordinary variety, working as a composer, musician, writer, poet, radio and television presenter, postal censor and translator. Bilingual from birth, she found the immense joy of blending in with people of different cultures, and this is the remarkable and remarkably frank story of a life lived to the full by the doyenne of British residents in Japan,” the Japan Society of the UK writes.

Read more detail about her life in this obituary.