For weeks I’ve been like the guy in The Matrix, dodging the bullet of late winter illness. First Haiku Husband went down, then Haiku Teenager, but me, no. Stayed well, stayed active. Until yesterday. Blergh. Today is rainy and dark which suits how I’m feeling.

my runny nose –
everywhere but on its dewdrop
the twilight fades

Ryunosuke is regarded as the father of the Japanese short story. Read more about him here.

– Richard Wright, 1908-1960
from his entry at the Terebess Asia Online website

But this isn’t a death-bed illness, just some days of feeling miserable and sneezing fit to bust! And maybe a cough setting in. It will pass and I’ll be as good as new again, just have to be patient (heh) and let the darn thing run its course.

signing my will
on my hands a smell
of growing things

Thrilled to make the acquaintance of the Woman of Words artwork in Wellington last month – a tribute to Katherine Mansfield, New Zealand’s greatest writer, by sculptor Virginia King that was unveiled in 2013. Read King’s story about the work here, including the detail of references within the work.

The seam on the face is deliberate, a nod to the masks that KM often wore or felt she wore. Isn’t the ‘shopping list’ hair just a perfect depiction of a woman’s mind? Photo: Sandra Simpson

Not long before our trip to Wellington, I bought a copy of Katherine Mansfield’s New Zealand by poet and Mansfield scholar Vincent O’Sullivan, a collection of photos of KM or from her era with commentary and KM quotes that brings to life her time and milieu in this country. Mansfield was born in Wellington in 1888, leaving for good to live in London in 1908 and dying in Fontainebleau, France in 1923. She is known for her short stories (she also wrote poetry but it hasn’t stood the test of time) and one novella, The Aloe, a longer version of Prelude, that was edited and published after her death by her husband John Middleton Murry.

In Wellington we walked part of the way to the Pencarrow lighthouse (didn’t have enough time to do the whole track) and on the way out and back stopped in Day’s Bay for nourishment. For me, Day’s Bay is essential KM territory so imagine my delight when I spied a sign that said ‘Katherine Mansfield House’. Haiku husband found a park and we walked back to it, and lucked upon a chatty workman.

It was being renovated after a storm, he said. Read a 2013 news report about that here. Nothing original left, he said. And how right he was.

The O’Sullivan book contains a photo of the cottage which was built in 1906 for the Beauchamps (KM was born Kathleen Beauchamp), a tiny, single-storey dwelling, although the family had been going to Day’s Bay for summer holidays since the 1890s.

The book also includes a quote from her journal in 1907: “I sit in the small poverty-stricken living room, the one and only room which the cottage contains, with the exception of a cabin-like bedroom filled with bunks, and an outhouse with a bath and wood cellar, coal-cellar complete. On one hand is the sea, stretching right up to the yard; on the other the bush growing close down almost to my front door.” 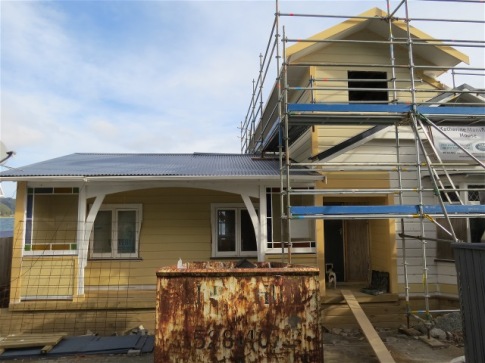 The Day’s Bay house under renovation. The single-storey section to the left may have been the original cottage. The front door was in the centre between the windows. The porch appears to be the same. Photo: Sandra Simpson

Today, the sea is still at the back door and the only road in and out of Day’s Bay around the coast to Wellington is virtually at the front door.

As the morning lengthened whole parties appeared over the sand-hills and came down to the beach to bathe. It was understood that at eleven o’clock the women and children of the summer colony had the sea to themselves. First the women undressed, pulled on their bathing dresses and covered their heads in hideous caps like sponge-bags; then the children were unbuttoned. The beach was strewn with little heaps of clothes and shoes; the big summer hats, with stones on them to keep them from blowing away, looked like immense shells. It was strange that even the sea seemed to sound differently when all those leaping, laughing figures ran into the waves.

Detail from the Woman of Words artwork. At night the sculpture is lit from within. Photo: Sandra Simpson