“Blossom” is synonymous with spring but, traditionally, “plum blossom” in Japanese haiku is a signifier for late winter and, as that’s where my part of the world is at, it’s timely to shine a small spotlight on this flower. 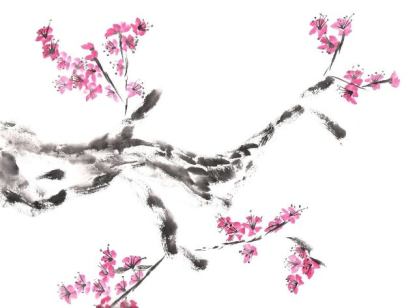 Several years ago I joined a Chinese brush-painting class where we worked through the “four gentlemen”, starting with bamboo before moving on to orchid, chrysanthemum  and finishing with  plum blossom.

Our teacher, Sally, had a magnificent scroll painting of plum blossom she had bought in Hong Kong. It was enormous and masterfully done. Painted images of plum blossom often show snow on the branches too, reinforcing the late winter season.

Billington is the first plum variety to crop and these blossoms were out with the magnolias in a Tauranga garden. Photo: Sandra Simpson

home village
all the potholes
patched with plum blossoms

abandoned fan –
I return it
to the plum blossom thief 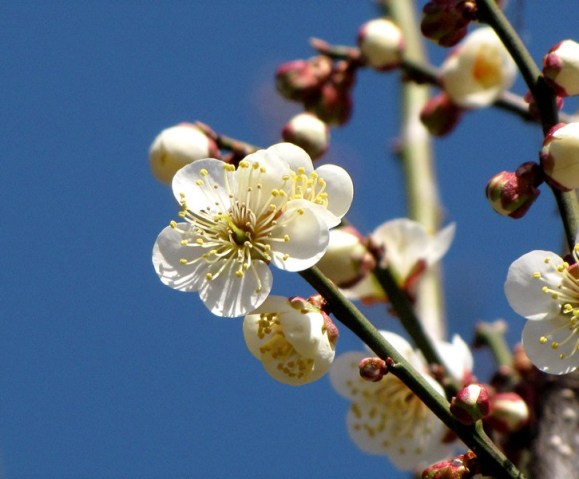 I visited Japan in April 2012 and while the cherry blossom was opening in the lower areas, in the higher country we were still in late winter. This photo was taken in the Fuji Five Lakes national park (Fuji-Goko).

Gabi Greve, writing about plum blossom on her World Kigo Database website, says plum blossom viewing was a popular pastime, particularly in the Heian period (794-1185), but was done more on an individual basis than by the big groups who undertake cherry blossom viewing – red plum blossoms  remind the viewer of the coming spring, while white blossoms are a reminder of the snow that may still be about or still to fall.

While looking for haiku for this post, I came across this one in Haiku Before Haiku by Steven D Carter (Columbia University Press, NY, 2011):

A note with the haiku says the wife of Sugiki Mitsusada was “often called the first female haikai poet” … so I did a little online research and found this from Far Beyond the Field, Haiku by Japanese women, compiled by Makoto Ueda:

The earliest documentary evidence for female authorship of haikai is  … Enokoshu (The puppy collection, 1633), which collected verses  written by poets of Tei-mon, the oldest school of  haikai. [It] contains works by a person identiﬁed only as “Mitsusada’s wife”. Of the 178 poets represented in the anthology, she was the lone woman. That statistic, and her being listed under her husband’s name, suggest the kind of status to which women were conﬁned in haiku circles during this seminal period.

Read a sample from the book.